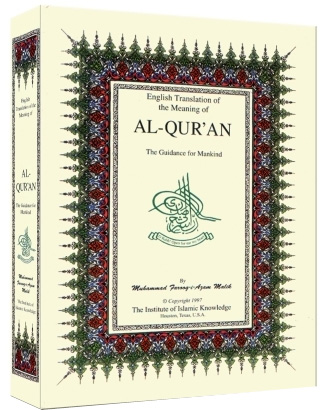 English Translation of the Meaning of Al-Qur'an With Arabic

The Message of Allah, the Qur’an, has four rights:

Tilawat (to understand and act upon its guidance)

Tadabbur (to comprehend its teachings)

and Balaghat (to preach and convey its Message).

The right of “Balaghat” - was made a mandatory Assignment for the Muslim Ummah The Prophet Muhammad, peace be upon him, has clearly stated this assignment of the Muslim Ummah in the following words: “Ballaghû Annee Walo Âyah - Convey from me even if you have the knowledge of one Âyah.” In another Hadith he said: “O Muslims: The best among you are those who learn and teach the Qur’an.” At Hajja-tul-Wid‘a Rasool Allah, peace be upon him, said: “O you, who are here, convey this message to those who are not here.” Al-Hamdulillah, this publication, Al-Qur’an - the Guidance for mankind, is meant to fulfill all these four rights of the Qur’an: It’s Arabic text is to read (Qir‘at), translation of its meanings in contemporary easy American Language is to understand and act upon its guidance (Tilawat), information about Major Issues, Divine Laws and Guidance prior to the translation of each Sûrah is to comprehend its teachings (Tadabbur), and its distribution to Public Libraries, Muslims and non-Muslims at large is to convey its Message (Balaghat).