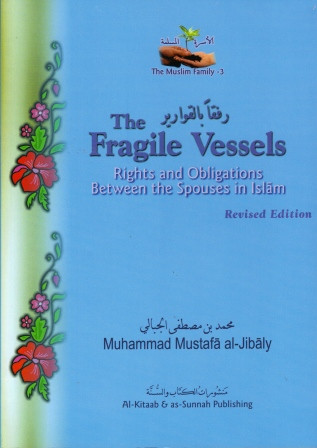 The Fragile Vessels - Rights & Obligations Between The Spouses

This is one of a 3-book series covering various aspects of marriage according to the authentic Sunnah. Marriage plays a most central role in the human life, and has been largely discussed by the scholars of Islam through the ages, resulting in numerous writings and treatises. Some of those writings, mostly by contemporary scholars, have been translated into English. However, we find them restricted in scope, addressing Muslims who live in predominantly Islaamic countries, or overlooking important real issues that have developed under modern civilization. This leaves quite a large gap that needs to be filled for the benefit of the Muslims in English-speaking countries, and this is what we attempt to fulfill over the span of three books."

Covers the obligations of the two spouses, the wife's rights, and the husband's rights. Contains biographies of the Mothers of the Believers, paints a very realistic picture from the life of the Prophet (pbuh) with his wives, and presents a complete discussion of the hadeeth of Ummar Zar'.